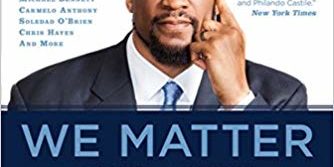 Former National Basketball Association player Etan Thomas has released his latest book We Matter: Athletes and Activism and his goal is to encourage athletes to use their voices.

The Roman Show spoke to Thomas at the Miami Book Fair, while he was on tour promoting his book available for purchase.

“I wanted to talk about this explosion of different athletes using their voices, using their platforms in the way of the athletes of the past. So I spoke to a lot of athletes from the past like Bill Russell, Kareem Abdul Jabbar…,” he said. “But I wanted to speak to the current athletes to hear why they are using their voices. A lot of times you hear that this person wore a t-shirt, this person took a knee, but you don’t get to hear the in-depth reason as to why it is important to them. That’s what I wanted to do.”

Thomas spoke to the Miami Heat’s Dwayne Wade in his book. The future hall of famer talked about how he and his teammates wore hoodies in remembrance of Dwayne wade I asked him why the entire team wore the hoodies after the Trayvon Martin incident. George Zimmerman, a neighborhood watch coordinator, killed the young African American, who was unarmed. Zimmerman stated he was in a physical altercation and claimed self-defense.

“I wanted to encourage athletes to use their voices. Interviewing these athletes you are able to see what they are able to do with thief voices,” Thomas said.