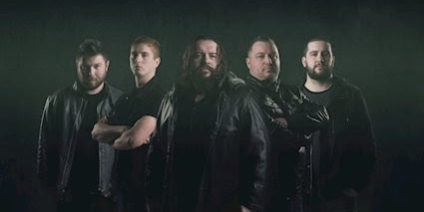 Canadian band Atria will be unleashing their debut EP New World Nightmare and fans can anticipate a musical diversity.

“We have a lot of the heavier songs, but we have songs with the hooks as well. (It’s) very heavily influenced by Maynard from Tool. There’s a lot of that. There’s a lot more screaming than what you hear in the videos.”

The debut release for the band is just a teaser of what is to be expected from them. Not just sticking with the usual heavy formula of the genre, they also add plenty of synth and orchestral parts and experiment with varying degrees of technicality over four introductory tracks.

Emmans talked about how he became involved with heavy metal.

“When I was eight-years-old I did a school play,” he said. “I ended up doing Phantom of the Opera. My music teacher knew an opera teacher and suggested I compete. I did all of the competitions and eventually when my voice changed like at 12-years-old I was listening to Tool and Slipknot and all this stuff and I said I am going to use this, but do it my way. I love the hooks like big anthemic songs. It’s fun to challenge yourself.”

Emmans talked about the individual songs, lyrics and more. Hear the complete interview on the latest episode of The Roman Show.