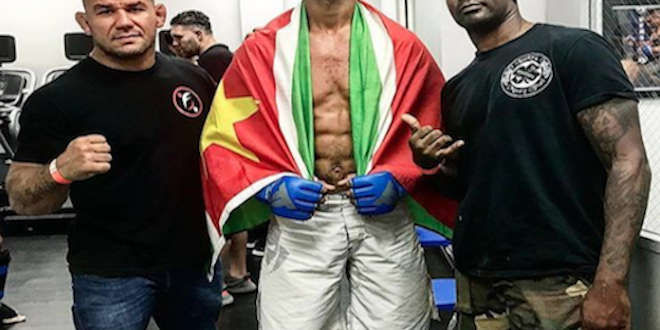 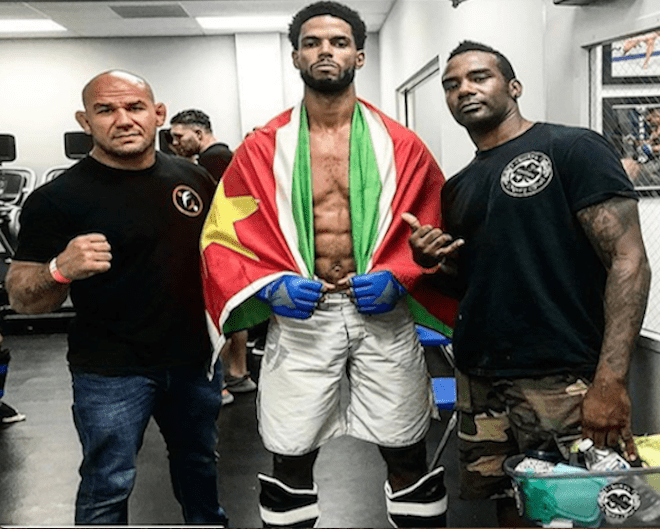 Located on 115 N.E. 54 Street in Miami’s Design District, Lucky’s Muay Thai is a mixed martial arts gym where people of all ages and various walks of life strive to reach their fitness goals. However, LMT is also a “fighter’s gym” and the championship facility that MMA’s next big thing, Allan Saint-Gelais calls home. In just two years, Saint-Gelais is one of the highest touted prospects in the country and has captured the attention of the UFC, Bellator and other mixed martial arts organizations looking for future stars.

Born in Trois Rivières, Guadeloupe, the self-proclaimed “Island Boy” has tallied an MMA record of 3-0 and is currently ranked fifth in the Sunshine State. With a pair of TKOs and a submission win in his docket (all in the first round), the likelihood of witnessing a highlight-reel finish is a distinct possibility any time he steps in the cage.

Standing six-feet, six-inches tall and weighing 185 pounds, “El Jefe” (“The Boss”) is the reigning Premier Fight League Middleweight Champion. With greener pastures awaiting him in the professional ranks, Saint-Gelais will defend the PFL belt July 14 in what could be his farewell bout as an amateur.

As he prepares to enter the next phase of his athletic career as a blue chip commodity, Saint-Gelais reflected on what’s been an incredible journey, highlighted by his ability to successfully transition through various sports and disciplines.

“Throughout my experiences playing different sports at a high level, I acquired a lot of knowledge and skills that allow me to excel in MMA within a really short period of time,” said the brash 28-year-old in a recent interview with The Roman Show.

From bouncing basketballs to dribbling heads off the canvas

Like most naturally gifted athletes, competitive sports became a part of life at a very early age for Saint-Gelais. Towering over his peers, ASG was recruited to join the youth program of the professional basketball team, Aix Maurienne in Savioe, France, and gradually began to morph into a world-class competitor.

Capitalizing on the opportunity, Saint-Gelais would not only go on to graduate high school with honors, but also continued to evolve between the lines, becoming a two-sport collegiate star.

While recovering from a forearm fracture during his second year at The U, Saint-Gelais was exposed to traditional Thai boxing and MMA. That’s when he met Lloyd “Lucky” Walton, and much like Jules Winnfield –played by Samuel L. Jackson– in Pulp Fiction, ASG had (“what alcoholics refer to as”) a moment of clarity.

“I’ve always felt at home doing martial arts,” said (multiple-time Muay Thai champion) Kru “Lucky” on what it feels like to find one’s true calling. “I also think it’s important to do things in life that are challenging.”

ASG: Born to be a fighter

As a young boy, Saint-Gelais chased his dream of becoming an elite athlete, but had no choice but to rely on others’ lead. As a young man entering his athletic peak, he’s not only found his true identity as a fighter, but he’s also doing everything in his power to ensure his dreams materialize.

Showing the maturity of a seasoned veteran, ASG has surrounded himself with the best coaches available. While “Lucky” has helped him master Muay Thai and MMA striking, his ground game has bloomed under the tutelage of BJJ World Champion and ADCC Absolute World title-holder, Roberto “Cyborg” Abreu at Fight Sports Miami, 339 N.E. 61st St, Miami, FL 33137.

“When talent meets hard work and with the proper mindset there are no limits,” said Abreu of Saint-Gelais’ MMA future following his last fight. “The belt is coming home and it’s the first of many.”

Saint-Gelais will defend his middleweight crown later this month at MMA Masters, 7245 N.W. 25th St, Miami, Fl., in what will likely be his final hoorah before embarking on the next facet of his MMA journey.

“There is no escaping your true self inside the ring,” “Lucky” added. “Your truth will be shown.”