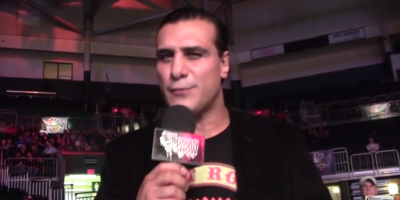 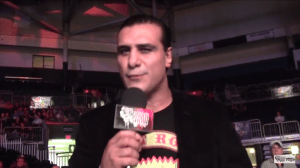 Alberto Del Rio says he would return to mixed martial arts fighting if the money is right.

In an interview with The Roman Show, former WWE champion del Riio said he wouldn’t mind fighting inside a cage. Del Rio will be calling the action for the mma fight card Combate Americas on NBC Universo September 17 at 11 p.m. ET.

“Since I left WWE everyone has been trying to get me in their organization to fight again,” he said. “But the money is just not there. Luckily I do pretty well in wrestling. I am one of the most paid pro wrestler out there. If the money is not there then there’s no reason for me to go back in there fight and hurt my body.”

Del Rio last fought in 2010. He holds a 9-5 record with most of his wins coming from submission. His notable matach was against mma legend Mikro Filipovic, which he lost by Knockout.

Del Rio spoke about how he got the play-by-play announcing gig.
“My good friend Campbell McLaren has been trying to get me to join the organization since I left the WWE, since the beginning he’s been trying to convince me to get in the ring or cage and fight again,” he said. “Unfortunately we couldn’t get a good deal talking about money wise. We found this way being part of the organization without fighting. He invited me as an announcer.”

When asked about fighting a fighter such us mma legend Fedor Emelianenko, who is coming out of retirement, he would accept a challenge, but there money has to be right.

“If the money is there why not,” he said.

He also spoke about wrestler treatment in Mexico with the passing of El Hijo Del Perro Aguayo who passed away almost instantly during a match.

We can expect a lot from them. They are hungry to show what they can do. They found a platform for them to show.

“It’s difficult to accept when someone like him goes before his time especially for us in the business,” he said. “We all know what risks we have when we go out there. If you do something wrong or if the other guy does something. All we can do is learn from that mistake. The originations in Mexico need to change the way they treat the wrestlers the way they treat the sport. We live a different situation down there. Its just a few guys like myself and Rey Mysterio that get treated the way we deserve they don’t do the same with the other wrestlers. It’s about to change.”