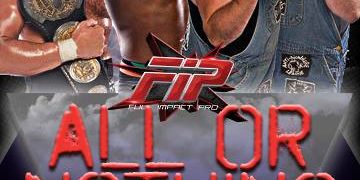 WWE Cruiserweight Classic alternate Aaron Solow said he had the experience of his life when he went to the Performance Center and is ready if the promotion were to call him.

Solow is getting ready to team up with Jason Cade for the upcoming FIP event All or Nothing in Orlando, FL airing on www.wwnlive.com Friday September 30. They will take on tag champs The Hooligans.

Solow joined The Roman Show and talked about being an alternate.

“It was a great experience one of the best experiences of my life,” he said. “The way it came about they started promoting the cruiserweight show and they didn’t fully announced everybody. For a while we knew there was a show but no one knew who was in it. I was hoping they contacted me. They told me I would be part of the alternates.”

He said he has seen many of the alternates make their way in and he said he is just waiting for the phone call.

I am on standby. I am waiting for them to contact me,” he said.
“There’s still that chance they contact me or any of the alternates,” he added. “As of right now, I don’t have a definite answer or date. If it happens it will be a big surprise for me, as it will for everyone else.“

He said the WWE is treating the cruiserweights as its own division.

He said the addition of the cruiserweights can change the panorama of the main roster.

“When you see cool new things if they see it as a treat of course the main roster will step up,” he said. “It’s healthy competition.”

Hear him talk about his thoughts on the cruiserweight classic tournament and more.