A New side of Chris Hype Henry to debut soon 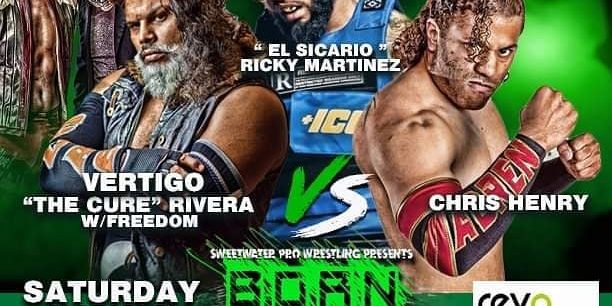 Sweetwater Pro Wrestling fans are in for a treat as they might be seeing the end of a familiar face in the independent scene fade away to make way for a new character.

Chris “The Hype” Henry is going through a transition. He spoke to The Roman Show about going on a different route in 2020.

“Truth be told I am going to myself on a different direction in 2020,” he said. “The SPW is possibly the last time you’ll see Chris The Hype Henry. I am going under the name Ozymandius. I want to show versatility and a different side.”

At SPW, Henry will meet former Major League Wrestling star Ricky Martinez and Vertigo in a three-way dance for the number spot to challenge for the SPW heavyweight championship.

“At the time, I was working as a quality control technician which is basically a company makes an item and I go back behind the people who make it and made sure they do it right,” he said. “If I don’t do my job right it could cost them thousands of dollars so I have to do my job right. But a friend of mine wanted to be a wrestler. He wanted me to help him get in shape. He invited me to meet his trainer. That took me over to Robert Gibson’s school All Pro Championship Wrestling in Douglasville, Georgia.”

Prior to hitting the squared circle, he was enrolled in the Marine Corps.

“I took it as a fish to water. I didn’t have to many challenges,” he said. “I did six years in marine corps as well. It became easy to adapt a harsh environment. I had a lot of discipline. There weren’t too many challenges. They came once I learned and to build up in the industry.”

Hear the first episode of 2020 as Henry speaks about training at a new school where AEW’s QT Marshall is head trainer, the reason he is switching characters and the inspiration behind it.